Touch vs touchless kitchen faucets are both excellent, and it all comes down to personal taste. The main distinction between them is that a touch faucet must be activated by touching it with some part of the body, but a touchless faucet does not need to be touched.

Instead, it has a motion sensor function that allows it to detect physical contact, at which point water flow is activated.

If you want to keep your faucet as clean as possible and don’t want to waste time cleaning it, hands-free touchless faucets may be the way to go.

Because they have a far smaller likelihood of becoming dirty or contaminated with things you might be cooking or cleaning with, they are a great option for those who want optimal cleanliness.

Although not everyone prefers touchless faucets, some people do. The movement sensors detect any movement, which means the water can turn on at inconvenient times, such as when you’re cleaning around the faucet or leaning over it to get something.

In the long run, this may lead to considerable water usage. We put up a full review of our top kitchen faucets in both touch and touchless versions.

Touch vs touchless kitchen faucet are not as different as you might believe. Both types of faucets are cutting-edge manifestations of the conventional kitchen tap.

Unlike a traditional faucet, which necessitates a person to pull or push a handle, touchless and touch-sensitive faucets require less effort to turn the tap on and off.

The distinction between them is that a touch-sensitive kitchen faucet responds to physical contact. Whilst a touchless one detects the presence of something in front of it.

How Do Touch-Sensitive Faucets Work?

How can a kitchen faucet turn on and off with a single touch? The answer comes down to electricity. Whenever you shock someone by touching them in the winter, it is a reminder that our bodies have the capacity to store electrical energy, known as capacitance.

A touch-sensitive faucet also maintains an electrical charge and is equipped with a sensor that picks up on an increase in that charge when you touch it.

Even more so, these sensors are sensitive enough to distinguish between a brief touch and a more extended grab when you’re moving the faucet or cleaning it.

The sensor is meant to be activated only with a single touch and should not react to a longer grasp.

How Do Touchless Faucets Work?

Instead, they sense the existence of your hand or another object in front of the faucet. The majority of hands-free faucets utilize an infrared sensor linked to infrared light to do this.

When your hand comes into touch with the sensor, the infrared light is reflect off it and into the detector via an infrared light.

All you have to do now is place your hand near the faucet to turn it on and off. Ultrasonic field sensors are also available, as are other sorts of sensors.

When your hand passes in front of an ultrasonic field sensor, it disrupts the field, which activates or also shuts off the faucet.

Choosing the Right Faucet for Your Needs: 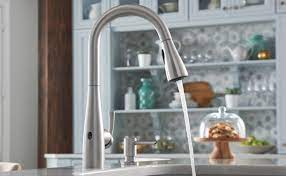 Touchless faucets are a great improvement over regular faucets, and they come in both touch and non-touch varieties.

People have varying opinions on which is better, so both options exist. Some people may want the opportunity to enjoy a totally touchless experience if they frequently turn on their kitchen sink with dough, raw meat, or other food on their hands.

The same might be true for individuals who engage in gardening or pottery arts who don’t want to get their hands dirty. Touchless faucets are the finest option when you need water on-demand without creating any messes.

A touch faucet, on the other hand, allows you to have more control over your water. When you must touch the device to turn it on or off, rather than making a motion in front of it.

It is less likely to inadvertently switch it on or off. Because these faucets may be operated by touching them with a wrist or elbow, you can usually keep the mess off your hands and onto the sink.

What Is an Escutcheon on a Faucet? kitchen Bath.. How To Remove A Delta Kitchen Faucet? …..

Kitchenfaucetcenter.com is reader-supported. We may earn a commission through products purchased using links on this page. Learn more here.

ABOUT US
Kitchen Faucet 101 is a participant in the Amazon Services LLC Associates Program, an affiliate advertising program designed to provide a means for sites to earn advertising fees by advertising and linking to Amazon.
Contact us: [email protected]
FOLLOW US
© 2021 kitchenfaucet101.com All Rights Reserved.