Do you want to change the faucet parts(causing leakage or dripping) or replace the whole Moen kitchen faucet? If yes then here is the complete guide on Moen faucet removal.

Moen is the world’s best brand in kitchen faucets, but sometimes it’s faucets cause problems and inconvenience. If your faucet is causing leakage or you want to install a new faucet but you don’t know how to remove Moen kitchen faucet?

Then, don’t worry and don’t call the plumber for this task because after reading this surprising guide, you would remove Moen kitchen faucet.

In this post, you will learn the complete strategy or procedure from removing Moen kitchen faucet to reinstalling or installing a new faucet.

So keep reading or scroll down to the list of steps you should follow to remove Moen kitchen.

Here is the list of tools that you’ll require to start removing Moen kitchen faucet.

All these tools are readily available at home, but you can buy from a hardware store or online if you don’t have.

Don’t know where the exact problem is? But you want to solve the problem yourself! Then keep reading and follow the step by step procedure to remove the Moen kitchen faucet.

Either you want to change the Moen kitchen faucet or replace the parts which are causing leakage. Follow along with all the steps, and you will be able to solve your problem. So let’s get started,

Step 1: Shut off the water supply:

Locate under the sink and find the valve which supplies water to the faucet. After that turn the valve off, if there are two valves, one for hot water and other for cold water then turn off both the valves.

If you are unable to find valves under the sink, then turn off the main water supply of your home.

Step 2: Make sure all pipes are empty:

Before removing the faucet, make sure that there is no remaining water in the supply pipelines. If there is water in the pipes, dry it before moving ahead. Otherwise, the water will create a mess and stop your faucet removing project.

First, of all, use a screwdriver to take apart the Moen faucet handle. When it gets loose, you’ll find a set screw connected to it. Now use a wrench to loosen the screw and then pull out the faucet handle.

After removing the handle, you will see a dome and plastic part. First of all, remove the dome which you can easily remove without any tool. After that, you’ll find a black jacket, use the wrench to remove it by turning wrench anti-clockwise.

Step 7: Take off the spout:

Now, as you have removed the ring and washer, you’ll see a water spout which you can easily remove without any tools. At this point, make sure you should write all the steps and sequence of the parts because you have to fix the faucet back as it was.

After taking off the spout, you’ll find a clip holding the cartridge. Remove that clip with a screwdriver.

Step 8: Take off the cartridge:

As you have removed all the faucet parts, it’s time to decide whether you want to install a new faucet, reuse the damaged parts, or change the broken pieces with new ones.

Here we will cover all the three aspects. It is entirely up to you which method or strategy you choose according to your faucet condition or what you have decided before.

How to reuse and change damaged parts?

If you want to reuse the damaged parts, clean them, take white vinegar, mix it with water, and apply it on the parts. Leave the parts overnight or some hours. After that, you’ll see all the corrosion, rust and debris has gone.

And if there are cracks on the cartridge replace it with a new one.

How to install a Moen kitchen faucet?

Here is the video tutorial for you to understand better how to install Moen kitchen faucet.

So you have done your job of removing and installing Moen kitchen faucet without a plumber. Whenever we do something on our own for the first time, it gives tremendous happiness which we can’t even get after paying a lot of money.

And if you have still not started the Moen kitchen faucet’s removal procedure, then mustered up some courage and started it. Because if you don’t start it, believe me, you miss an excellent chance of doing something on your own, which can increase your confidence in yourself.

So muster up the courage and start removing Moen kitchen faucet. Have you enjoyed it or not? Let me know in the comment box below. 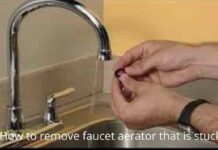